As every Rotarian knows, for every £1 which Rotary gives to the campaign to eradicate polio, the Bill and Melinda Gates Foundation adds a further £2.

It was disappointing to learn this week that there are currently 8 countries where polio has been confirmed in 2018, mostly due to conflict in those countries making it difficult to keep up the programme of vaccinating children.  This will inevitably lead to a delay in achieving the goal to eradicate this disease.    This comment from Bill Gates makes interesting reading.

Bill Gates – What I learned 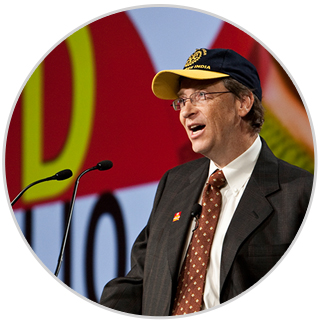 I underestimated how hard it would be to vaccinate children in places where there’s political violence and war. Families move around to escape fighting, which makes it hard to keep track of children and make sure they get all the doses of the vaccine. Or sewage systems get destroyed, allowing the virus to spread as children come into contact with an infected person’s excrement.  This is a key reason why Afghanistan and Pakistan have never been free of polio—in fact they are the only two countries that have never been free of polio.

I spend a lot of time on polio, part of it talking to the funders to make sure they continue their commitment even though eradication is taking longer than any of us would like. I remind them of the huge benefits of success, and the risk that the disease will return in a big way if we don’t finish the job.

I also remind them what a difference innovation is making. We’re now able to test sewage samples to track the virus and find the source before an outbreak starts. And the global health community is finding creative ways to work in war zones, having stopped outbreaks in Syria and Somalia in recent years.

Finally, I am hopeful about a new oral vaccine being tested in Belgium and Panama. The results should be out in 2019, and if this one proves effective, it would overcome some of the problems with previous oral vaccines when they’re used in places where few children are immunized. The new vaccine could be in use as soon as 2020. “