This years winners of the Andrew Simpson Olympic Bursary, from the Gryphon School in Sherborne, had a weekend to remember when they were invited to the Powerman event on 11th May. 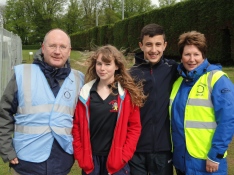 The Andrew Simpson Bursary was set up after the 2012 Olympics as a legacy to run until the Rio Olympics in 2016.  It has attracted so much interest that only applicants who were above county standard were able to apply.

Members of our club had previously been given an introduction to the two winners, Juliet Barlow (athlete) and Drew Stanton (pistol shooter) when they came to a club meeting and provided a fascinating insight into their enthusiasm for their sport and what winning the bursary means to them.

Juliet is an athlete whose speciality is 800 meters although she also does cross country running.    She trains 3 -4 time each week and has already achieved national standard.  Winning the bursary will enable her to compete in more competitions with the goal of competing in the Olympics in 2024.  To achieve this she will need to improve by 3 seconds each year – last year she improved by 16 seconds so she is a few year ahead of target.

Drew is in his second year as a shooter, having initially started his sporting career as a runner and swimmer in which he won, gold, silver and bronze medals.  He competed in Manchester where he came 3rd and qualified to complete for Britain in Monacco where he came 11th.  When someone suggested shooting to him, he very quickly found his real enthusiasm and gave up running and swimming in favour of shooting.  The bursary will enable him to pay for coaching fees to improve his skills and he has his sights set on the 2016 Olympics in Rio, where he plans to be the next champion.