A cheque for £500 was handed over to members of Sherborne Youth Club at our meeting on the 17th June by President Nick to support the Kaleidoscope Project being run from the Youth Club in Tinneys Lane. The project provides a 20 week group work programme one day a week for young people in Year 9 and above. The course consists of workshops, off site activities and discussion groups.

The young people attending the course are identified by the Early Interventions Service. Typical comments from the young people on the course include “I am much more focused than I was” “I don’t get as mad as often as I did” “I feel prouder and more confident than before” “I think now about the consequences of my actions before I act”

The clubs donation came at an opportune moment as there were serious concerns about the continued funding of the course. Rachel Fraize-Brown who manages the Youth Club said “the donation could not have come at a better time” 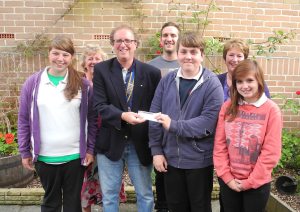