Derek Bell MBE will be our very special guest at the Sherborne Classic & Supercar Show on 21st July 2019 at Sherborne Castle.

Spanning over 40 years, Derek Bell MBE has enjoyed one of the most successful, diverse and wide-ranging careers of any British racing driver. He is best-known as the consummate endurance sports car driver who won the Le Mans 24 Hours five times, the Daytona 24 Hours three times and the World Sports Car Champion twice. He is considered as the greatest Englishman ever to compete in endurance racing.

In addition to joining our commentators to greet the tours and parades at this year’s show, Derek will be hosting a lunch table in our Members marquee.

This is the sixth year that out club, together with Yeo Vale and Brue Valley Rotary Clubs, have been running this show as a  fund raising event for local charities, and we are delighted to have Derek joining us for the day. 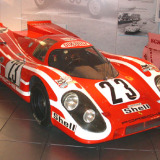 Porsche is the marque feature for this year’s show and you can find out more, apply to enter your vehicle, or obtain a members ticket, at http://www.classic-supercars.co.uk